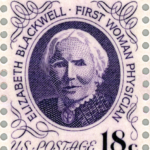 Dr. Elizabeth Blackwell, the first woman in America to receive a medical degree, was born in England in 1821 and moved with her family to the United States as a young child. She studied privately with male doctors who supported her cause. After being rejected by 29 medical schools, Blackwell was finally admitted to New York’s Geneva Medical College as a joke. The admissions committee thought that a rival school had submitted the application as a prank. It was no joke when she graduated at the top of her class in 1849. This made her the first woman to graduate from an American medical school.

Unable to find work because no institution would hire her, she won the support of the Society of Friends, called the Quakers, who began referring patients to her. Because no one would rent space to her, she purchased a house in New York and opened an office in 1852; four years later, this one-room dispensary became the New York Infirmary for Women and Children.