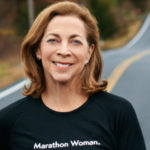 “Get out of my Race”
or Why Kathrine Switzer Inspired Me
by Jane Niemeier, Co-President Elect

Where I went to high school in northeastern Indiana in the 1960s, there were no school-sponsored sports for girls, not one. Girls all had to take physical education for two years, and there was a nine-week quarter of basketball required. But the basketball we played was only half-court basketball. Somewhere along the way, someone decided that women were too fragile to run more than a few steps.

In 1967, Kathrine Switzer decided she would enter the Boston Marathon, because she loved to run long distances. Since women were not allowed to register, she used her initials, K.V. Switzer. Fortunately for her, she had some men friends running with her including her ex-football player boyfriend, Tom Miller. After she had run only a few miles, the race director, Jock Semple, was told that there was a woman running the race. Semple found Kathrine and came charging from the sidelines and grabbed her saying, “Get the hell out of my race!” He then tried to rip the official number off of her sweatshirt. Tom Miller was infuriated to see this wild man grab his girlfriend, so he proceeded to knock Semple out of the way. In spite of this upsetting scene and blisters, Kathrine finished the race, thus breaking through a barrier for the rest of us.

In 1978, I ran my first marathon in Denver, Colorado. Nothing horrible happened to my reproductive organs either!