Sharon was involved in Speech and Debate, Basketball, Mock Trial, and National Honor Society. She will attend Wellesley College in the fall of 2016 where she plans to major in Political Science with the goal of becoming a foreign diplomat.

Caitlyn plans to attend UC Berkeley in the fall of 2016 as an English major and eventually become a journalist.  Caitlyn was president of her school’s Speech and Debate Club and Creative Arts Club, volunteered with the local homeless shelter, and served on her county’s Youth Commission.

Clare has been the president of her local 4-H club, the secretary of MCHS’s CA Scholarship Federation chapter, and active member of French Club.  She hopes to attend college at California Polytechnic State University, Fresno State University, or UC Davis.  She would like to become a veterinarian.

The Orinda-Moraga-Lafayette Branch invites you to webinar #9 in a series of presentations for high school students interested in STEM careers in OML’s Girls4STEM program. Topic: “Why Studying Materials Science is Like Playing Tetris” with[...]
Feb
15
Tue
2022
10:00 am California Senator Steve Glazer ...
California Senator Steve Glazer ...
Feb 15 @ 10:00 am – 12:00 pm
The Orinda-Moraga-Lafayette (O-M-L) Branch invites you to weigh in as their Public Policy committee brings you California State Senator, Steve Glazer speaking on current legislative issues. Click HERE to join Zoom meeting. More information can[...]
Feb
17
Thu
2022
7:00 pm “We Can Work It Out” – Diversity...
“We Can Work It Out” – Diversity...
Feb 17 @ 7:00 pm – 8:30 pm 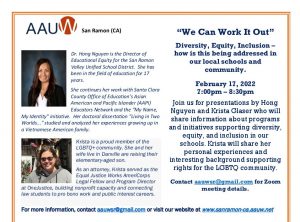